By DaraPersonal image
No Comments 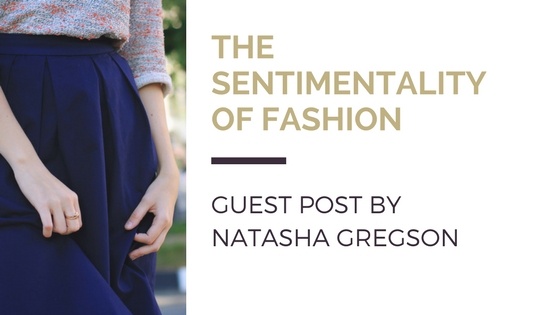 I responded to a comment request from a journalism student a few months ago asking why clothes have such emotional meaning for us. After sending over my thoughts I asked her to send me her finished article and liked it so much that I wanted to share it with you. I hope you enjoy reading it and if you’d like to discover more of her writing please visit her blog here.

It’s predicted that women only wear 20% of the clothes they own. Just what is standing between us and a good wardrobe clear out, Natasha Gregson asks…

I have a confession: I’m a hoarder. I hold onto everything from the perfume box a Christmas gift came in to my ‘homework club’ certificate I received when I was 9 (I was a cool kid). And don’t even get me started on makeup. The palette with hues so extreme it’s named ‘Acid’ and has only been used once when I spontaneously thought I could rock a hot pink eye (read: I couldn’t)? I definitely need to hang onto that just in case I need it someday. Basically, I’m awful at throwing things out.

I’ve always attached sentimentality to inanimate objects. There are just some things in life that we don’t want to bid farewell to because of the emotional connection they have to past memories. But then there are the more trivial relics that are just as hard to let go of; the tacky glitter globes I bought myself when I was 10 or the beautifully designed hat box that my naive younger self planned to store love letters in (I clearly didn’t predict the rise of technology/ just how awkward looking a teenager I would be).

But onto the worst culprit: my wardrobe. I’m not alone; it’s predicted that on average a woman only wears 20% of the clothes she owns on a regular basis. It’s a staggering estimate, especially when you consider the cost, of the extra 80% left hanging.

Why are we so bad at throwing away clothing that we don’t wear anymore? Is it misplaced sentimentality or does fashion hold a connection to who we were or want to be that we rightly can’t let go of? “Clothing is something very personal,” says designer Dara Ford, who has worked in fashion for over two decades. “Even very young children have clear ideas about which clothes they like and don’t like. It is perhaps the first area of our life that we have some degree of control over.”

The reason we hold onto pieces for so long might just be down to the very personal process for selecting the fashion we buy; it’s all about individual taste. “I definitely believe fashion and sentimentality are linked because it’s a very personal thing,” says fashion designer Zoe Stevenson. “People attach themselves onto things, which can inspire a designer’s collections. Just this week I had a designer at Laura Ashley who picked a pattern because it reminded her of the roses in her garden.”

What is it that drives that personal element though? For Zoe association between clothing and sentiment initially comes from smell: “I think other reasons for people associating memories with clothes is because they have worn it to a particular occasion that may have been important or at a significant time in their lives.”

Dara believes that clothing is personal because of the way we use fashion to express ourselves; to fit in or stand out. “Either way we are making statements about our beliefs, our values, our personalities. For special life events we tend to choose our clothes very carefully and therefore remember those outfits more than an everyday look. In this way certain items become associated with special moments and become bound up in the fabric of our life,” she says.

Long overdue a clear out, I became inspired by Carrie Bradshaw and invited my three closest friends over, popped open the Moët and made them watch me parade around in every single piece I owned while they faked enthusiasm and held up ‘take’ or ‘toss’ cards. Only joking, I can’t think of anything more boring or self-involved to make my friends do (instead I’ll just write about it and make you all read it). But, despite my uncharacteristically ruthless clear out, there are some clothes that will stay in my wardrobe indefinitely.

I suspect the reason I hold onto pieces for longer than I need to is due to some subconscious romanticism of what things were in the past or could be in the future. Take, for example, the royal purple, silk dress that I just can’t throw out. It is literally too painful to wear, no thanks to the awkward placement of sequins that scratch your arms. For this reason I’ve only worn it once. I’ll never wear it again but I still can’t throw it away. Why? Because it’s too pretty to throw in a monotonous heap of unloved clothes and, for me, it represents the person I want to be when I rarely leave the house after 10pm: fun, sparkly and joyous.

For Dara, it was a light blue coat that she had made from a piece of cloth sourced whilst she was studying fashion design at university that held sentimental value: “I wore that coat for my first walk with my newborn daughter and later that year for my father’s funeral. When a dry cleaner shrunk the coat by two sizes due to carelessness it was a real blow. I have since remade the coat in a different fabric, but it feels different and doesn’t hold the same meaning for me.”

Fashion is simultaneously obsessed with the past and the future. Every season we see a version of a ‘classic reinvented’ or the trend pages of magazines refer specifically to a decade’s archetypal style. That’s what’s so wonderful about fashion: it’s constantly innovative, challenges conventions but is also significantly influenced by the past. It looks back and moves forward: something that I believe is reflected in our own collection of clothes too. There’s a reason why our tastes and preferred pieces change over the years; we change as people.

I will never stop pining over minimalist Scandi-style interior design on Pinterest, nor will I ever stop admiring the meticulously organised wardrobe spaces in Elle’s ‘Closet Confidential’ pages. But sometimes the most eclectic wardrobes featured were the most fascinating to read about because of the dazzling stories behind the pieces. By contrast, I can’t claim that I wore my purple, sparkly dress to the MET gala, or that it was gifted to me from my dear friend Karl Lagerfeld, but it makes me happy, and isn’t that what personal style is about after all?

Guest Blog: How to pack for business trips

Guest Blog: How to pack for business trips